See some examples of their work in video below. 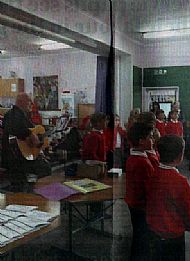 Gordon Primary School had great fun when a new fundraising CD called "Tales of the Sea and the Maggie Law was recorded in April 2013 at a live concert in Gourdon Village Hall to coincide with the opening of the refurbished Maggie Law Maritime Museum.

The songs and poetry on the CD reflect on the importance of the sea to this and other communities.

Also featured was music from the accordion of the late Robert Gowans.

The CD was released on the 4th July 2013  to coincide with the 16th anniversary of  the opening of the original Museum.

The double CD, priced £10, is available from:

All proceeds go to the museum.