The "Trustful" was built in St Monans, Fife at the Yard of James N. Miller in 1912. The painting by G.M. Brown shows the boat as she was in 1922 - 26, with registration ME 262. The Scottish Fisheries Museum in Anstruther found reference to her in the 1928 Almanac when she was registered to David Andrew, the then owner. The 1947 Almanac lists his son, David Andrew as owner at that time. The painting by Joseph Craig shows the "Trustful" as she was in later life ,around 1972. However, the Dundee City Archive - Registry of Sea Fishing Boats in Scotland came up with helpful, confirming and clarifying documents with regard to registration dates and owners. ·

My father sold the boat to Peter Abernethy in 1974 : he is registered as owner in April 1975. There is a note appended referring to the closing of the Registry in October 1975 on transfer of Registry to Aberdeen. 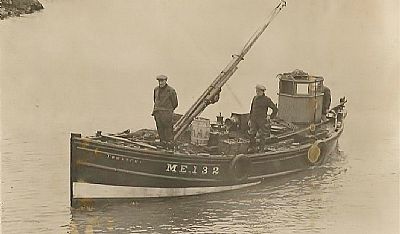 Pictured- at the stem, probably Big John, John Mowatt, my father’s maternal uncle - amidships – James (Jeems) Craig, my father’s eldest brother, and in the wheelhouse, either Adam Craig, my grandfather or Willie Craig, brother to Alex, Jeems and Joseph. In later life the Trustful had no wheehouse.