The Bella was a Fifie which was brought to Gourdon from Anstruther in 1912. According to the Database of ME Registered Boats, she was registered at Montrose as ME235 in December 1912. The database records that she was 43' long, displaced 11 tons and her beam was 11' 6". She had no wheelhouse. Her yawl-rigged foresail was the main form of propulsion. An auxiliary motor was fitted in 1912 with fixed gears, forward and astern. She fished with lines and drift nets.

Her owners were James, Alexander and Edward Ritchie. James Ritchie was her skipper.

She met her end on 26 September 1916. The Montrose Register records that she was blown up by a mine but this is not confirmed by the publication 'WW1 at Sea - British Fishing Vessels Lost to Enemy Action' which records
“BELLA, motor, 11grt, 25 September 1916, off Tod Head, captured by submarine, but not known how sunk, crew made prisoners.” According to website uboat.net, The Bella was sunk by Uboat SM U-64, captained by Kapitanleutnant Robert Moraht - The Bella was her first ship hit. Further information on SM U-64 can also be found on Wikipedia.

What is known is that the crew of six comprised: 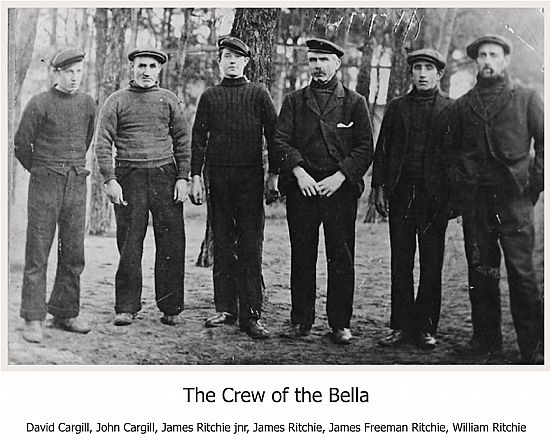 This photograph which was taken in Germany in 1916 was provided by William Cargill of Gourdon, son of David Cargill. Another copy of the same photo was contributed by Neil Ritchie.

William and Neil also contributed the following biographical details of the crew:

On capture the crew were taken to Germany and for an account of their experiences there see the article by John Mathieson first printed in the Leopard Magazine of August 2012.

More details of the capture and the subsequent imprisonment are given in the Mearns Leader article  by Roy Souter.

A pictorial record of life in the camp is provided  by the set of four postcards which were sent from Germany and which carry the Brandenburg postmark. Thanks are due to Janice Duncan née Fairlie, of Port Glasgow for making these postcards and the picture of James Ritchie available to us.

`Twas on a dark September morn the 'Bella' left the shore.
Sailing through the foggy dawn as oft she'd done before.
The crew was ready with their lines to earn their daily bread.
They little thought that autumn day would fill their minds with dread.

U64 was lurking there beneath the sea so grey
And saw through its periscope 'Bella' was easy prey.
It surfaced close to 'Bella' to 'Bella's' crew's surprise
To see a German submarine rise before their eyes.

"You are now prisoners of war," the 'Bella's' crew was told
And so they entered, one by one inside the U Boat's hold.
As each man was wondering what his fate would be,
The exploded wreck of the 'Bella' sank beneath the sea.

Their treatment by the U Boat crew was always very fair.
Their ration of the U Boat food was always a full share.
And so they sailed to Germany, to Keil to disembark,
To labour in a prison camp from early dawn till dark.

`Twas six long weeks ere wives and mothers learned to their joy
That each and every one was safe, every man and boy.
For two long years they laboured there under the Kaiser's thumb
Till the 1918 Armistice brought them safely home.

Four Ritchies and the two Cargills glad to be home each day,
The memory of the prison camp fading slow away.
Back to the fishing all were called but to their life afloat
To crew the Fifie,' Happy Return', 'Bella's' replacement boat.

A number of people have willingly cooperated in contributing the information and photographs which make up this page. Celia Craig undertook the onerous task of collecting the contributions and particular thanks are due to Neil Ritchie, William Ritchie, Alan Donaldson and Vally Craig.

Celia Craig has pointed out that certain points of detal given in the Leopard article by John Mathieson differ from the account given here. We believe our version to be correct.